Kiwi farmers are well-known as innovators so it’s no surprise that Keith Fergusson, the inventor of the world’s most portable trencher, is a former sheep and beef farmer. Keith hails from Matakohe, a small village on picturesque rolling hill country near the Kaipara harbour, north of Auckland.
Years of practical experience with vehicles and farming machinery – ranging from small engines to heavy contracting equipment – gave him a broad knowledge that would later prove extremely valuable.

With Keith’s grandfather, father and brothers all being inventors, he is carrying on a family tradition. Among his many other practical inventions, including an all-terrain 3-wheel farm vehicle, his father Gordon had produced a specialised mini trencher by modifying a regular chainsaw and timber chain.

Naturally this had a very high wear rate as the slender chain – which needed lubrication – was both drive and digging chain. It was clear though, that a very slim and portable trenching system would be extremely handy for burying the water pipe and electric fence cable that most farmers deal with – if it could be made durable.

Some years later Keith was travelling on a farming tour in England when the thought came to him. Why not stay with the lightweight power of a chainsaw engine and make a slim, bolt-on transfer case? Separate the small lubricated drive chain from a rugged dry digging chain!

Back in New Zealand, he got busy with his father and a talented local engineering friend, and a working prototype was soon in action. Named the Terrasaw (“Earth saw”), it worked amazingly well and the potential could be seen. With support from family members he took it to the Mystery Creek national field days in 2000. It received plenty of favourable attention and won an award.

With help from his brother Geoff it was successfully patented, and the future looked promising. However, the financial and technical challenges were many, no-one had ever made a working commercial trencher this small before. Development followed but the demands of farming and other commitments meant that for several years it remained only a part-time enterprise. 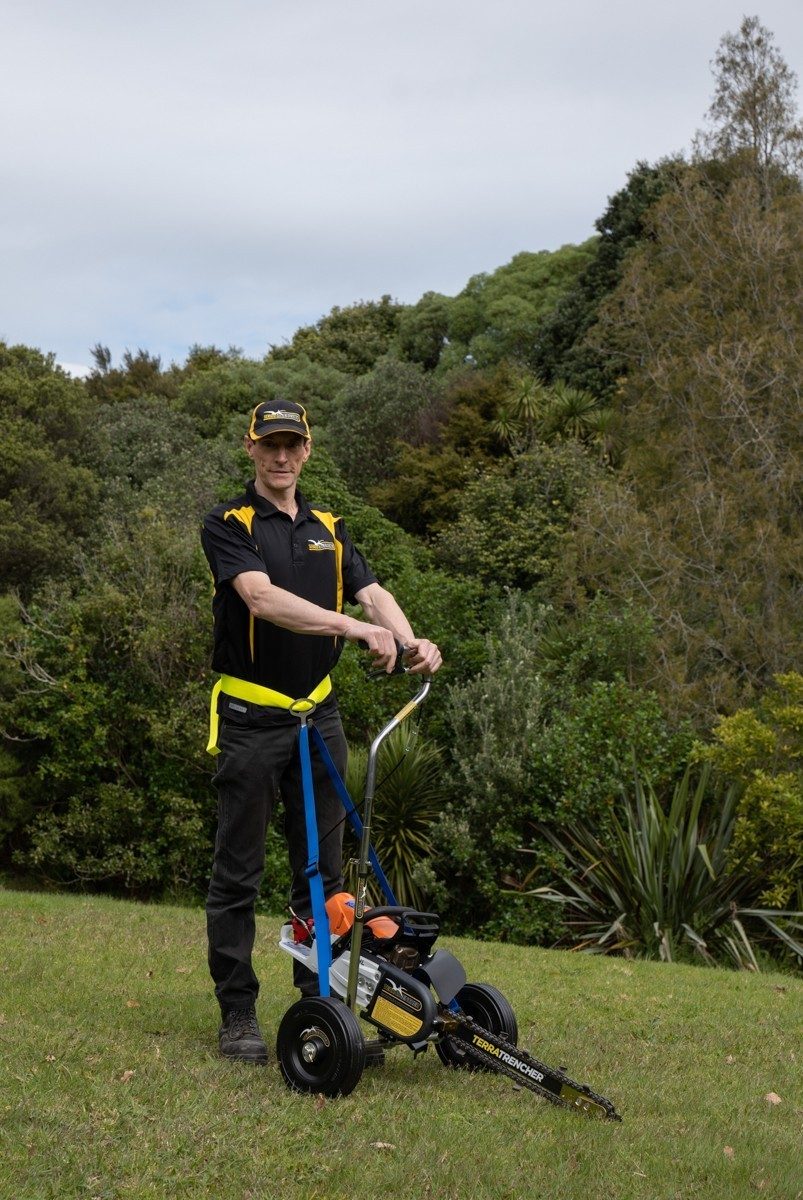 With renewed technical input, many engineering refinements and after lots of field trials a new version was built. It was able to cope with the extreme physical demands of trenching and had evolved into a practical commercial product.

Renamed the TerraTrencher to better describe its function, it has quietly become a secret weapon used by numerous commercial operators in the fibre, irrigation and plumbing industry.

The unique knowledge base that Keith and the Terrasaw Industries team has acquired over this long journey is an asset that many field customers call on and really appreciate.

TerraTrencher – the world’s most portable and versatile trenching system.